Skip to content
Previous Next
Tenet 9: The Driving Force of Health 3.0 is Love

What’s love got to do with it? Didn’t Tina Turner say it was just a second-hand emotion?

We’ve been trying that experiment for a while. It’s not working. The simple reason is that in health care, love’s got everything to do with it.

It’s what Marc Gafni calls outrageous love. In his words:

The cosmos is driven by love. Love is not hard to find. Love is impossible to avoid. In every single moment you are literally drenched in love. No corner of your being is left untouched. To wake up is to know that truth at the very core of your being. It is not a truth accessed through faith in a dogma. It is not a truth owned by the religions or some new age declarations. It is the deepest truth about the nature of reality that we have access to from the most profound sources of wisdom available on the planet.

Outrageous love is the force that has been incessantly self-organizing the universe from the Big Bang to the highest levels of humanity. To love outrageously is to identify with the evolutionary impulse itself.

I alluded to this outrageous love in my previous post on life-and-death decisions in health care. To illustrate this more, I want to talk about outrageous love that courses through a city, a football team, and a man whose unique story brings it all home. 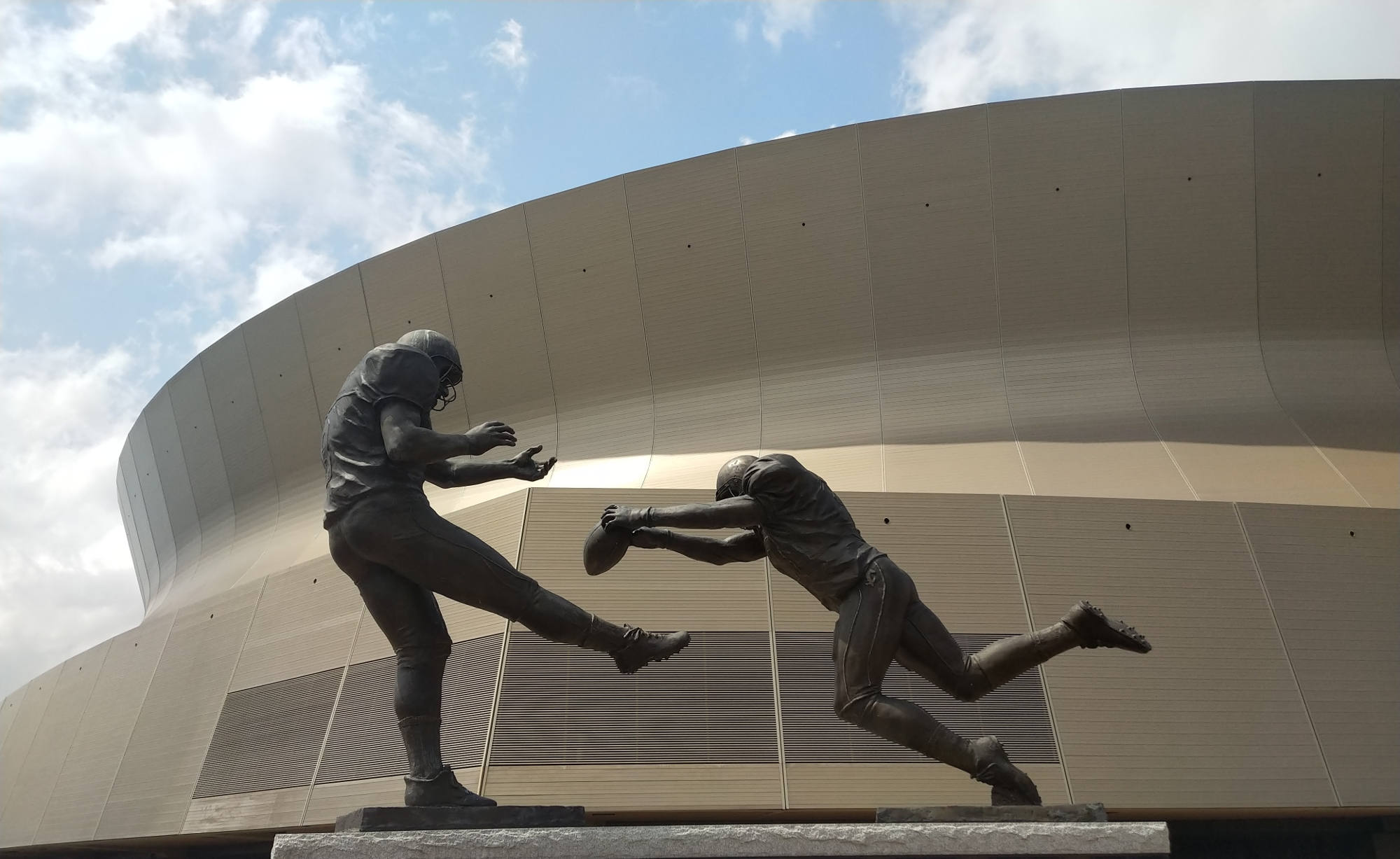 New Orleans has a bond with its football team, the New Orleans Saints, like no other city in America. The Saints are as New Orleans as po’ boys, second lines, and neutral grounds. And anyone who has ever lived in New Orleans knows that sooner or later, Lord how you want to be in that number. My number began when I moved to New Orleans at eight years old. I’ve had a love affair with the Saints ever since, long after we moved away.

In 2005, Hurricane Katrina destroyed much of New Orleans. The Saints’ home, the Superdome, served as a shelter of last resort for 20,000 people and became an awful symbol of the city’s despair. No one was sure if the Superdome, the Saints, and New Orleans would recover.

But the city did recover. The people of New Orleans rallied around their beloved Saints. And when the Saints returned home to face the arch-rival Atlanta Falcons for their first game back in the newly restored Superdome, a non-superstar but fan-favorite player named Steve Gleason blocked a punt that led to a touchdown for the Saints.

I was in the Dome that night, with 70,000 others. I saw people with tears in their eyes as they were waiting for the doors to open, the quiet expression of how hard it had been for themselves, the Saints, and the Dome to come back. And I will never hear a louder cry of cathartic joy en masse, when Gleason blocked that punt.

Gleason described the moment: “I felt like I was in every inch of the Superdome, up in the crowd, just so happy that I could do that for the people.” He was describing the taste of oneness known as samadhi. Everyone there tasted it.

Three years after he ended his career in football, Gleason was diagnosed with amyotrophic lateral sclerosis (ALS), a motor neuron disease of progressively worsening muscle weakness with no known cause or cure. The average life expectancy is 2–5 years. The disease leaves a person unable to walk, talk, and eventually breathe. But, the person can still think. And feel.

The backdrop to Gleason’s diagnosis of ALS is whether the repetitive hits inherent to football itself cause degenerative neurological diseases. Causation isn’t clear, although evidence has been building.

On this question, Gleason has reflected this:

So, I have conjured my own meaning from my circumstance, if in fact football did cause my ALS. It means to me that I gave my life helping a city and a region in ruins find some hope in their struggle for rebirth. I will never regret that.

He’s gone beyond that. He learned that people with ALS could live much longer by choosing to go on a ventilator. It’s a complex decision, but one that Gleason chose for himself so that through his reach, he could advocate for other people with ALS choosing to continue purposeful lives. His efforts to ensure all ALS patients have access to assistive technology similar to what he uses led to the Steve Gleason Act of 2015. And earlier this year, he was awarded the Congressional Gold Medal, the highest civilian honor given by Congress.

This is Gleason’s work out in the world. But Gleason’s inner world shows us even better what really matters in health care.

Six weeks after his diagnosis, Gleason and his wife Michel learned that she was pregnant. Gleason’s video journals to his son, along with his struggles as ALS ravaged his body, were featured in a documentary bearing his name.

That documentary embodies every tenet of Health 3.0. Uniqueness. The personal and non-personal. Interiors and exteriors. Parts and wholes. Conscious medicine. Antifragility. Evolution in health care. Life, in the face of death.

Gleason is an outrageous lover. And he’s committing acts of outrageous love that flow from his unique self, that only he can do. As a pro football player, brother, son, husband, father, bearer of a rare disease, activist, and savior of a city.

Michel is also an outrageous lover, committing acts of outrageous love that flow from her unique self, that only she can do. As an artist, sister, daughter, wife, mother, caregiver, and New Orleanian.

There is no cookbook for how it will all work. No prescription. Only intimacy between two outrageous lovers who have shared identity, in the context of each other’s unique selves. This is how Gafni defines intimacy. This is the only way to get through the pain, to higher ground.

Love is the precious, fundamental, indefatigable impulse of Health 3.0. Because love is who we are. It’s not called the patient-doctor transaction. It’s called the patient-doctor relationship. That relationship is one of intimacy. Not intimacy of the sexual or romantic. But the intimacy of a surgeon who sheds tears after losing a life on the operating table. Of an obstetrician who delivers her thousandth baby like it was the first time. Of an oncologist who shepherds a dying cancer patient through the end of life. Of a pediatrician who doctors a critically ill infant back to health.

Of course, health care goes beyond just patient-doctor intimacy. It includes the intimacy among nurses, therapists, pharmacists, social workers, staff members, technicians, and food service and maintenance workers — just to name a few of the many vital, everyday people who personify the health care system. And it includes the intimacy consecrated by every single person who has had the burden and the honor to care for someone who has suffered.

It need not be big or flashy. But when you see someone so directly connected to the undercurrent of love that he is manifesting as an exquisite jewel of love for someone in need, it is a sight to behold.

Once you recognize that love drives it all, and you as a human being are infinite creativity lived as love itself, then you realize there are no externalities. No one must be left out.

What would it mean that there are no externalities in health care? It would mean that the endless debates between the left and the right about our health care system would fall away:

It would mean that we drop the debate about whether health care is a right or a privilege. Every unique self is entitled to health care. Period. So, we have a sacred obligation to fulfill that entitlement, with the shared responsibility that naturally comes with shared identity.

It would mean we create structures in health care that allow the cylinder of outrageous love to generatively become deeper and deeper. Only then can we answer questions of how to finance health care.

It would mean my becoming driven in my own practice to start a model I and others have called “priceless pricing.” Where I’m okay with not turning someone away because of an inability to pay. That endears me to the left.

But, it would also mean my leaving the third-party-payer model, because that massive middleman obstructs intimacy and burns us out. Oh, and prevents me from being in a position to even offer priceless pricing. The left doesn’t account for that.

It would mean my valuing more freedom and choice and less bureaucracy in health care. That endears me to the right.

But, it would also mean my realizing that capitalism’s fetish for accumulation is ruining health care. Consolidation, vertical integration, and the push to scale! scale! scale! are all geared toward one thing, no matter what you’re told — maximize profit. Often at the expense of the most vulnerable among us. The right doesn’t account for that.

When everyone in health care exercises their divine right to love outrageously, to give forth their unique gifts in concert with one another, there is no more left and right. There is no center. The non-personal becomes so personal. We go outside and inside. The whole truly does become greater than the sum of the parts. We become more conscious of one another. The system becomes more antifragile. We and the system evolve. And we honor life and death, both deep in the core of medicine, with the dignity both deserve.

Tina Turner knew better. Love is not but a sweet old fashioned notion. Love is the golden thread that weaves together every single thing that is Health 3.0. Without it, medicine is lost.

This post is dedicated to two exquisite jewels of love who have cared so much for my mom on her recovery from brain injury. Martha and Monty, I can’t thank you enough.